For Academics For Venues About

A funny, thought-provoking show created afresh each time by the audience in conversation with an artificial intelligence.

In this live show, members of the audience are given the chance to talk to a state of the art self-learning AI. The host sets the audience a challenge; to agree a best possible outcome for relations between humans and intelligent machines. But the AI itself has another agenda and it can also learn from the audience. The content and tone of each show, as well as the ending are different each time depending on the conversation they have.

This is a pioneering use of AI as a tool to deliver genuine audience agency in the creation of an experiential exploration of the impacts of automation on what it is to be human.

Watch our documentation of performances at the Cube Bristol in June 2018.

"I had tears running down my eyes I was laughing so hard. 10/10, would Echoborg again"

“Reflecting on who speaks, who leads and who is most scared to lose their power.”

“It was a lot of fun because it was playful.”

“I was thinking like, how can I overcome the system and destroy it.”

Origin of the concept

In 2014 psychologists Corti and Gillespie of the London School of Economics coined the term Echoborg.

An echoborg is a hybrid agent composed of the body of a real person and the “mind” (or, rather, the words) of a conversational agent; the words the echoborg speaks are determined by the conversational agent, transmitted to the person via a covert audio-relay apparatus, and articulated by the person through speech shadowing. Corti, Kevin and Gillespie, Alex (2015) Offscreen and in the chair next to you: conversational agents speaking through actual human bodies. Lecture Notes in Computer Science, 9238 . pp. 405-417. ISSN 0302-9743

Interactive dramatist Rik Lander has taken this idea and built a dramatic, funny and troubling scenario around it. In October 2019 the show will be performed at LSE.

During the show there is no one behind the scenes speaking into a mic or typing the replies. The conversations are with a genuine artificial intelligence. A microphone pics up the words spoken by the interviewee. These are input to the bot via a speech-to-text program. The bot responds via a text-to-speech program into the headphones of the Echoborg who repeats the words.

Each performance influences then next. In this way audiences are not only creating the performance each night but helping in the ongoing evolution of the show. The first version in February 2016 had 43KB of code. By May 2018 it had 794KB of code.

You can book I am Echoborg for your conference or workplace

I am Echoborg is available to book for your venue, festival, conference or workplace. Whether you want a big evening performance or a daytime workshop for your team, we can frame the event to work for you. We can also customise the content to reflect people, technologies or issues that apply to you. The smallest group we have staged it for is 3 people. It can also work for crowds of 100+.

Watch our 4 minute documentation of performances at the Cube Bristol in June 2018.

What threats, opportunities, structural or ethical questions does AI pose for your organisation?

AI and automation pose massive questions for all of us. I am Echoborg delivers a visceral way to explore the issues around automation, such as employment, data privacy and democracy. The show is experiential; the group, through it's spokes-people, have an encounter with a self-learning and self-questioning AI. These exchanges stimulate not just intellectual but also emotional and social responses.

By staging an event for your board, teams or stakeholders you can spark the conversations about possible futures in a way that a dry presentation of the issues never could. 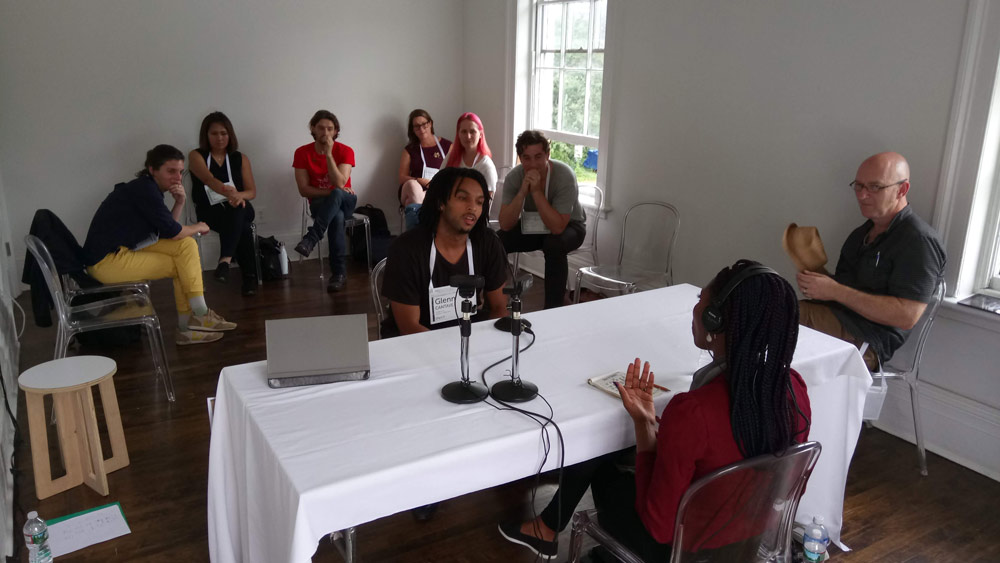 From small rooms with no lighting... 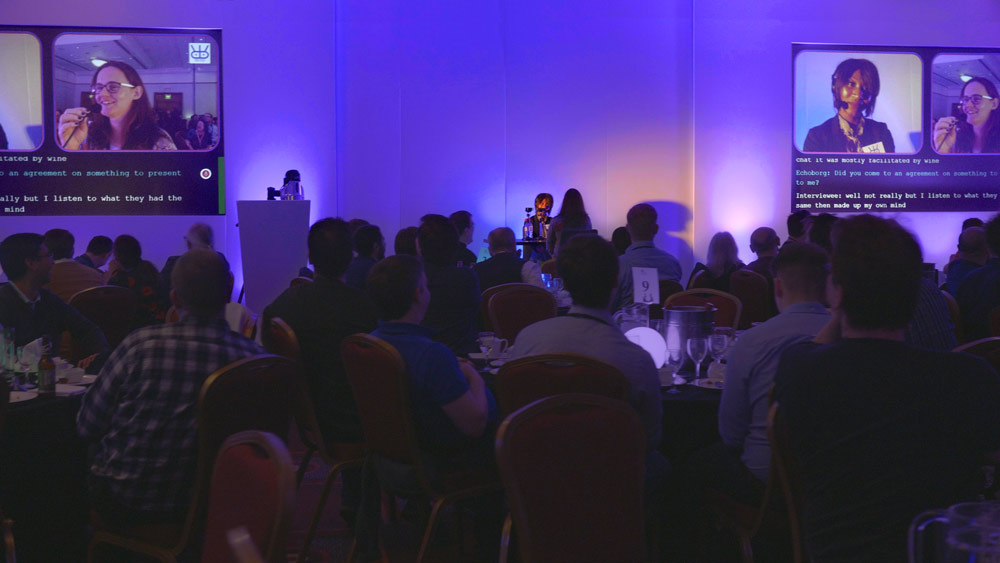 to large rooms with lighting

We arrive with two cast members, (the host and the Echoborg), the interview desk and the technical kit. The show can be installed and sound-checked in less than 2 hours assuming everything is ready for us.

Generally we prefer to stage it in a room where seating can be arranged to facilitate easy discussion between audience members. Sometimes it is good to have the interview table on a small stage (approx 2.5m x 2.5m) and/or lit with spotlights. Room size depends on audience numbers.